These custom made machines were produced in a converted dairy in Norfolk Street in the city at a rate of around six bicycles per week.

To celebrate the new centenary in 1900 and to promote his shop and bicycles, John made his own track bike, painted Red, White and Blue featuring a custom-made, 100 tooth chainwheel. John rode this bike until his death in 1942 and it remains a treasured possession of the family to this day. By the time of The Great War production of The Light Blue bicycles ceased, as men were called away. Following this, larger manufacturers began to produce more affordable models on a greater scale and The Light Blue bicycle was seemingly consigned to the history books. However, the family have remained in the cycle trade to this day and John’s great grandson Lloyd Townsend formed a company called Ison Distribution.

In 2006 lightweight, quality city bikes for the Cambridge market and beyond were designed and manufactured bearing the Light Blue name. In 2009 Lloyd happened to meet Keith Norhona (Managing Director of Reynolds Technology) in an airport departure lounge and began discussing the options of working together, with a view to producing a range of high end, steel, retro and modern bikes. The following year saw the introduction of the Light Blue Trinity track (fixie) frame, made from Reynolds’ iconic 531 double butted tubing. After that came the Kings, a 70’s style road bike, featuring the ultra-modern Reynolds 853 tubing and fully specified with new ‘retro' components.

"Being a 4th generation Townsend involved in a family bicycle business in the cycling city of Cambridge, bicycles are literally in my blood and it’s hardly surprising that I would find myself immersed in the bicycle industry.

"I was first aware of the fascination and fun of riding bicycles at a very young age, when my Grandmother (Midge Townsend) tricked me into believing she had hold of the seat on my pavement bike… having removed the stabilisers, she sent me off riding alone on two wheels along the village cul-de-sac road I was born and brought up in. 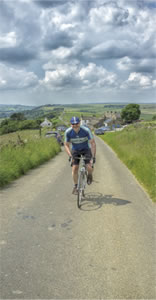 "Back in the days before BMX and Mountain bikes, several mates and I would to go down the local woods and try to get airborne on whatever bikes we had. I didn’t do the landings, very well on my drop bar bike and decided that this was too painful to be long term fun. So I concluded that my ‘racer’ was a really best used as a great way to get around and it became my main form of transport for me as a youngster.

One thing I regret is that I never got into racing, as I will never know if I’d have been any good. That said… I still hold a huge passion for sports bicycles.

"I started working as a Saturday lad in in our combined Raleigh bicycle and toy shop. I became well acquainted with the workshop and my dad would show me the tricks of the trade. In 1983, after finishing my further education at Cambridge Technical College, I decided I wanted to work full time within the family business. Soon after joining, I asked my dad what the odd bike was that I’d seen in a murky corner of the warehouse. He told me it was great granddad’s bike, a ‘Light Blue’ bicycle made in 1900 to celebrate the turn of century. We both became somewhat inspired and together decided to renovate it. Dad found a local company in Cambridge that managed to carry out the Nickel plating and even pulled a favour at the Raleigh factory to apply the hand painted gold coach lining. I knew then, over 30 years ago, that one day in the future I wanted to revive The Light Blue brand itself.

"The family business has evolved and over the last 20 years, we have developed a new division, Ison Distribution. This new division has allowed us to form several new connections within the modern bicycle industry and with help from suppliers and partners it has been possible for us to revive The Light Blue brand.

"The Light Blue sports range of bicycles has received particular attention from me in their design and development. They are not intended as race bikes, however, I believe the range contains bicycles that are very capable of winning hearts and minds. Having been privileged enough to ride a Light Blue Kings from London to Paris with the Hot Chili event, I can say without any doubt that modern engineering can still blend with retro styling.

Some might ask if we will ever go racing with The Light Blue brand? Well, the only answer I can give is never say never!

"The Light Blue, after 120 years, still alive and very much kicking!"

An old school bike racer, Steve joined the company in 2014 to help Lloyd make his vision of a range of Light Blue bikes a reality.

With more years riding and racing ‘push bikes’ than he cares to remember, our Brand Manager lives and breathes bicycles. When he’s not at work he’s organising, officiating and even racing and riding himself, all Steve’s family are cyclists and he’s heavily involved in the club and race scene. So when he first came to see Lloyd, he instantly understood where the brand was coming from and could still see a very definite potential for steel bicycles. 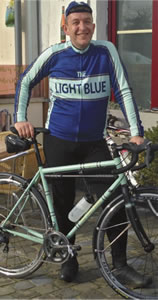 "I was impressed with The Light Blue bikes and despite the frames being factory built in Taiwan, they were every bit as attractive as a hand built frame from an artisan British frame builder. The design, quality of build and finish was first class.

"Cycling and the bikes are big in the UK now and I knew that there was a pretty big interest in retro steel bikes, with events like L’Eroica. Many new cyclists, as well as the old ones were starting to realise that bikes made from steel, were in fact every bit as good carbon or aluminium and very desirable."

Steve joined the Light Blue and at the end of the first week he packed a van and took The Light Blue Kings and Trinity to the inaugural L’Eroica Britannia in Derbyshire.

"I was blown away by the interest in our bikes and my intuition was confirmed. The event was a massive success with thousands of visitors all interested in retro steel bikes and all potential Light Blue customers.

As well as exhibiting the bikes Steve also rode the event, around the Derbyshire dales, “Not only did the bikes look good, they rode well too. We only did the short ride and we took our time, but the Kings that I rode was really comfortable and handled well, just as you would expect. It climbed well too, in fact it was spot on and I couldn’t fault it."

Although our Brand Manager has been around since before the modern frame materials mentioned above, that’s not say he’s steeped in the past and he’s been working on the modern steel bikes too, “Also using Reynolds tubesets, we’ve developed three very interesting contemporary bikes, that will cover most road bike requirements you can think of.

"We've got same great designs and builds, from fast road/sportive to bike trekking and long distance continental touring, we’ve got a bike for almost any occasion.

"Again, I've ridden them a fair old bit and although Lloyd says they’re not designed for racing I’ve done a bit of road racing on the Wolfson. Also, I’ve fitted it with mudguards and ridden across Flanders (and the associated cobbles) and up taken it up mountains on a Spanish training camp. None of which phased the Wolfson and it performed superbly."

So, Steve, along with Lloyd has steadily been finalising the details and fine tuning the designs and features of the whole range, to provide an impressive family of retro and modern steel tubed bicycles.

Our Retro frames are of a classic design from Reynolds steel tubing using traditional lugged/brazed construction. With a 1" threaded headset and trusted creak-free BSA type threaded bottom brackets, all these frames offer classic style and reliability.

Our Modern frames are also made with Reynolds steel tubing, but are tig welded to save the lug’s weight. (Notably – 853 Wolfson frame is one of the lightest steel frames available.)

All of our modern frames have corrosion resistant ED coated base finish.

On the Robinson we still run with the fast handling variable sports geometry and ample clearance. Special features for this model are switchable allow dropouts, allowing for geared and single speed builds, plus 103 or 135mm rear hub spacing (or even 142 thru-axle hubs, if required).

The Darwin features our own design CNC machined ADS-3 dropout system, which allows for derailleur, hub gear and single speed drive trains. This incorporates the disk brake which remains neatly out of the way of racks and luggage. Notably the Darwin has been tested for use with the Gates carbon belt drive and features a ‘split’ right and seat stay to facilitate this option.

Why have we selected to use Reynolds tubing? "Heritage & Quality" – is the answer.

Birmingham based Reynolds Technology Ltd (RTL) has a long history in the tube making industry. World renowned in the bicycle industry, with no fewer than 27 Tour de France champions crossing the finish line atop bicycles built with Reynolds tubing. Why would we want to use anyone else's tubing?

Our flagship road frames, the Kings and Wolfson are made from Reynolds 853, so what's in a number?

The benefits of air-hardening steels are particularly noticeable in the weld area, where unlike conventional steel alloys, strength can actually increase after cooling in air immediately after welding. 853 is heat treated to give high strength and damage resistance, and the steel properties allow thin walls to be used, so that lower weight but fatigue-resistant structures can be made. 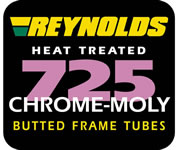 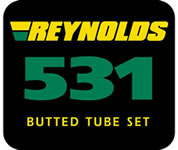